The bathhouse (thermae) in the Roman town of Coriovallum – the predecessor of the city of Heerlen in the Dutch province of Limburg – was originally built in the third quarter of the 1st century. A substantial expansion took place around 100 AD. From the 3rd century onwards, Coriovallum and its surroundings depopulated, and parts of the bath complex were decommissioned. After the town was abandoned in the 5th century, the bathhouse  was also forgotten. Fragments of columns were discovered in 1940 by a farmer while ploughing the field.

Subsequently, systematic excavations were carried out – first by amateur archaeologist H.J. Beckers and later by archaeologist Prof. A.E. van Giffen – at which time all the wall fragments and foundations were exposed, in part even below the foundations. In the 1950s the site was covered up again, only to be excavated once more between 1975 and 1977. During these latter works, the foundations were surrounded by a ‘space frame’, a structure that was to become the newly founded Thermenmuseum, a museum dedicated to these baths and Roman history.

In 2013, the curator discovered serious damage to the masonry and partial instability of the support structures. Restoration work was urgently required. This also provided an opportunity for new multidisciplinary research. One of the research topics was building archaeological research. Because there were also sections of still upstanding masonry, observations could (perhaps) also be made of the finishes of the outer and interior walls and the floors. 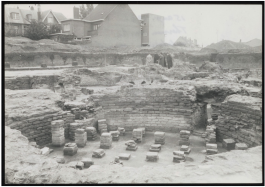 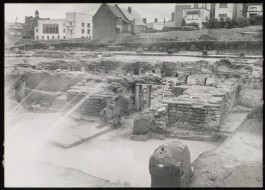 Starting in 2015, a multidisciplinary study of the Roman bathhouse was carried out, including building archaeological research by Kees Peterse. The aim of that research was to make a thorough analysis of the wall fragments, foundations and the water supply and drainage system in order to redefine a construction and usage history and reassess Van Giffen’s ideas. The plan was to use the findings from the research to create a new 3D model.

Ultimately, it emerged that there were too many unanswered questions to be able to create an unambiguous model. In order to guarantee the coherence between the various research disciplines, research questions were formulated in advance. The report, delivered in 2019, formed one of the building blocks of the integral research report, which was presented in 2020. 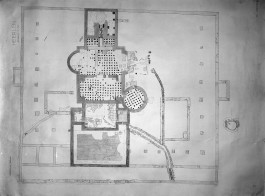 Heerlen, plan drawing based on the excavations in July-August 1941. 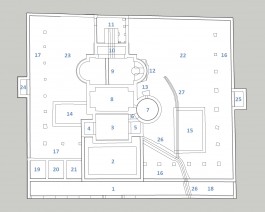 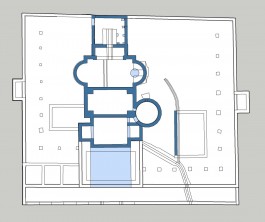 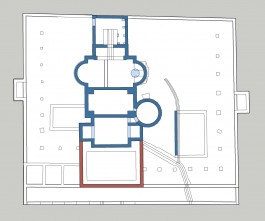 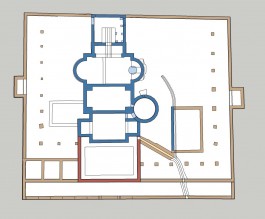 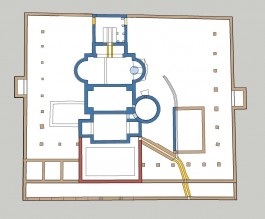 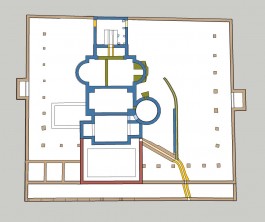 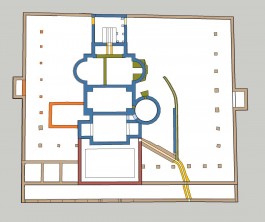 Kees Peterse did not conduct a full investigation of the thermal baths, so this is actually not a good example of the method described above. It is, however, one of the most striking examples of research into ancient masonry structures, which has been a speciality of Peterse since his dissertation on the houses in Pompeii.

The Heerlen Roman bathhouse was built of brick and stone, of which substantial parts of the foundations and even sections of still upstanding masonry have been preserved. The built remains are here the most important source for the analysis of the construction and usage history. Archaeological and building archaeological research go hand in hand here. The site is a protected national heritage site of archaeological significance, which means that the archaeological traces must be preserved as much as possible.

It was therefore not possible to carry out new archaeological excavations here, apart from digging trial trenches to make some additional observations and to determine the conservation status of the site. The researchers, therefore, mainly had to make use of the findings of the archaeological excavations carried out in the 1940s, a period in which the means and methods were less developed than they are today. Moreover, the research question was different: at the time, the research was more focused on excavating and recording foundations. Fortunately, survey drawings, photos, field notes and reports from the 1940s have been preserved, and many finds were recovered. This source material has been extensively scrutinized, in part even newly interpreted and meticulously recorded. This provided a lot of additional data compared to the existing publications.

Subsequently, all rooms and spaces, wall surfaces, including finishes on the inside and outside, and the floors were meticulously documented and analysed. This research had never been carried out so precisely on this site, and this resulted in a lot of new information.

View of the reconstructed caldarium from above. Photo by Kees Peterse, 2018.

The arrow points to a section in a joint where significantly different mixtures of mortar have been used. This does not indicate different phases, but rather a difference in the composition. Photo by Kees Peterse 2018.

Based on the building archaeological research, conclusions were drawn about the design, construction and use of each room. The relationship between the various rooms and spaces was also considered at all times, continuously looking for the connection between these. The findings and conclusions were combined with the previously recorded results of the archaeological research and the results of the newly conducted multidisciplinary research.

Another interesting observation was made regarding this latter aspect, while differences in the composition of mortar normally indicate a difference in phase, this was not always the case here. Particularly in the masonry of the caldarium, many of these seams could be detected when studying differences in the mortar; however, these seams did not in any way correspond to a construction phase. What apparently happened was that small amounts of mortar were prepared throughout construction, each time with variations in the composition and mixing. The result is clearly visible differences in colour.

At a number of crucial points, parts of the building are missing (either due to natural deterioration since the 5th century or lost during excavation) or extensive repairs have been made such that the relationship between certain rooms/spaces can no longer be determined. Due to this, the research appeared to have hit a dead end.

It emerged that the solution could be found in an additional investigation of the site terrain and changes in this terrain. The original slope of the site could be reconstructed by means of meticulous recording of the transitions between foundation and upstanding structures in all wall fragments. Initially, the ground sloped in two directions but was levelled during a second construction phase.

This change in ground level could also be ascertained almost everywhere. The difference in the ground level during the first and second construction period was a clear indication of the phasing of the complex. It was now possible to determine which parts of the building were at ground level in the first phase and which were at ground level in the second phase. Naturally, the change in ground level also had consequences for the supply and drainage of the water, including the drainage channels. The phasing of the complex that had been established was further supported by the changes in the channels.

Other fields of research

Unlike many of Kees Peterse’s other studies this was a sub-study, that’s to say part of a larger, comprehensive research undertaking. Though the various researchers did exchange information during their separate investigations, a synthesis of all the work was only done when combining this into the integrated report. It was concluded that the building was constructed in the period between 65 and 73 AD and expanded around 100 AD. From the 3rd century on, parts of the building were decommissioned, until it was completely abandoned in the 5th century. After that it fell into disrepair and faded into obscurity.

The building archaeological research yielded a lot of information about the complex, especially in relation to comparable Roman bathhouses. With this, Kees Peterse has contributed a great deal to knowledge about the design, development and use of the Heerlen Roman bathhouse. Not all questions could be answered, and probably never will: too much information has been lost. However, the significance of this bathing complex has been highlighted once again.

Left: Pompeii – caldarium of the Stabian Baths.
Right: Stockstadt am Main – plan of the bathhouse at the Roman castellum (circa 110 AD)  (www.museen-mainlimes.de).

To raise the building from a floor plan to a 3D structure, a comparison with other bathing complexes in the Roman Empire was needed. There was a complicating factor however: right at that time, in the 1st century, significant developments in the architecture of bathhouses were taking place, along with changes in their use. This resulted in so many uncertainties that an unambiguous reconstruction based on the information available proved impossible.

An example is the interpretation of the four corner reinforcements in the tepidarium. This may indicate a groin-vaulted ceiling (as in the Thermes à la palestre in Gigthis and the South Baths at Timgad, Algeria), a barrel vault (as in the Stabian baths in Pompeii), or even a plastered, non-load-bearing ceiling in the form of a pitched roof. Even Van Giffen’s claim that the tepidarium was higher than the other parts of the building cannot be proven.

The further structural analysis based on the data of archaeologist Lynne Lancaster did not lead to unambiguous conclusions either. She concluded that when concrete barrel vaults are used, the wall thickness is never less than one tenth of the span, and in any case always at least two Roman feet (59.2cm). In Heerlen, the tepidarium has a wall thickness of 60cm with a free span of 554cm, the caldarium has a wall thickness of 60 to 69cm with a free span of 633cm. Was this in fact a faux vaulted ceiling, which Vitruvius describes as a system of iron rods or arcs hung on a wooden beam, between which terracotta plates are affixed and these then covered with stucco? Remains of this sort of structure have been found in the Silberberg villa in Bad Neuenahr-Ahrweiler.

For information on the caldarium, the research into the baths of Pompeii and Herculaneum, all older than 79 AD, was particularly important. This revealed a radical change in the design and use of these complexes in the 1st century AD, precisely in the period that the Heerlen Roman bathhouse was built. The older structures from that period are low and dark, the more recent structures high and light. This seems to be related to the development of panes of glass for windows. Windows with glazing could make a significant contribution to heating up the spaces. The discovery of plate glass in Heerlen suggests a high caldarium, where the base of the vault was higher than 2.5 meters, up to a maximum of 4.5 meters.

Click here for the Roman fortress at Haltern am See