Roman fortress at Haltern am See

The Roman fortress at Haltern am See (Aliso) was built shortly before the beginning of the Common Era, probably during the reconstruction of the infrastructure after the first Roman campaigns to conquer Germania. The ramparts and gates were made entirely of timber and earth (earth and timber ramparts with timber gates). As far as is known, all buildings were wooden or half-timbered (load-bearing timber with infill).

The Haltern fortress protected the transport route over the Lippe river. The fortress was situated at a still very recognisable elevated area close to the river, clearly visible in the landscape. A road ran along the foot of this fortress, and a harbour was located on the river.

In 9 AD, the Romans suffered a terrible defeat in the Battle of the Teutoburg Forest and the Romans were forced to retreat across the Rhine, which at the time formed part of the Limes frontier defence line of the Roman Empire.

In 2011, Kees Peterse was commissioned by LWL-Archeologie für Westfalen (the archaeology section of the Regional Association of Westphalia-Lippe) to create a reconstruction of the earth and timber rampart and west gate of the main camp as a 3D model. This would form the basis for the full-scale reconstruction on the original site. Kees Peterse also supervised these works.

No physical remains of the Roman fortress at Haltern have been preserved, apart from the soil stains. Given that these soil stains were documented during an archaeological survey, the publications and sources of the archaeological surveys of 1905 and 1971 were first re-examined. This was carried out in collaboration with Dr Bettina Tremmel, who was also involved in the research on behalf of the client. The excavation data was then newly recorded, which led to some corrections and additions. Following this, additional excavations were carried out between 2012 and 2014, led by Bettina Tremmel. This also gave the opportunity for determining more precise measurements. Furthermore, various construction phases could also be distinguished.

To gain more insight into the appearance of the earth and timber rampart and the west gate, a comparative study was conducted into similar fortresses and forts (castella) and other structures from the same period. Especially the investigation into the slightly older Oberaden fortress turned out to be of great importance. In addition, a relatively large amount of information could be derived from the timber castella in the Dutch part of the Limes, of which various remains have been preserved in the peat. Because peat can preserve timber, the conditions for finds in bogs are much better than those in Oberaden.

It was not possible to make a 3D reconstruction based on this information alone. Missing information would have to be supplemented through the analysis of images, an architectural study of timber and masonry defence structures, research into dimensions and proportions, and analysis of Roman timber structures (production, joinery, processing and assembly/construction).

Haltern: plan of the Roman military installations, with the main camp (yellow) and the fortified port (blue) (based on: F. Koepp, ‘Ausgrabungsbericht Haltern 1909’ in Römisch-Germanisches Korrespondenzblatt II, 1909 Nr.6, p. 28) 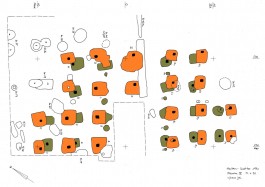 Haltern: excavation results of the west gate, based on excavations carried out by Von Schnurbein in 1971. This information has been newly mapped by Kees Peterse. The gate has two construction phases, shown here in orange and green. The earth and timber rampart connected to the gateway to the left and to the right.

3D-reconstruction of the west gate

Based on the excavation data, it could be concluded that there were different types of structures, i.e. a U-shaped gateway, towers and an earth and timber rampart. The rampart was surrounded by a double V-shaped ditch.

It was mainly post holes that were found during the excavations. The post holes of the towers and gates indicate that the posts in these were (on average) heavier than those of the earth and timber rampart. No traces have been found of lighter structures or structures built on shallower foundations. The west gate must have been a half-timbered structure made of wooden trusses interconnected in all directions. The size of the beams – derived from the found post holes in the ground – gave no clue as to the height and structure. Moreover, the sizes differ too much.

It has long been suspected that the gates and towers were higher than the connecting rampart, given the difference in size of the posts (based on the post holes). To substantiate this, comparative research of images, descriptions and masonry walls (like town walls) was necessary. For comparison, the walls would have to be ones of a defensive nature (i.e. town or fortress ramparts). Unfortunately, not all masonry ramparts have the same height. However, a relationship could be established between the width of the foundation and the height of the rampart, and it could further be concluded that gates and towers are almost always higher than the rampart. An example of this is an image on Trajan’s Column in Rome. Two high wooden towers can be seen behind a rampart. The rampart depicted appears to be built of masonry, but could possibly also be a timber rampart painted to look like brickwork.

The type of trusses and how these were constructed is based on the play of forces in this rampart. Since the earth infill pushes outward, this must be taken into account in all the joints. 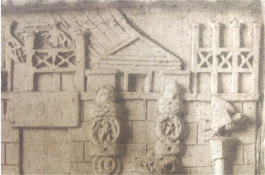 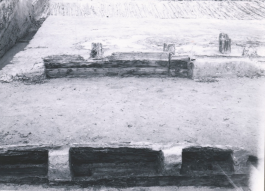 Valkenburg Castellum; excavation of the earth and timber rampart (photo from the collection of Provinciaal Archeologisch Depot Zuid- Holland). The lower parts of trusses to which wooden planks were nailed on the inside are recognisable; these planks formed the retaining walls for the earth infill. 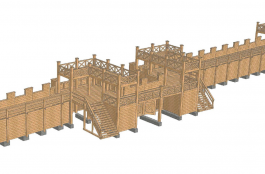 Construction drawing (drawing B. Terhalle). Concrete ground beams and steel reinforcements for the trusses have also been incorporated in this drawing.

The most difficult question in the reconstruction was determining the height of the earth and timber rampart. If the rampart is too low, it will not provide sufficient protection against attackers, too high and it becomes vulnerable to damage. The height of the gates and towers follows from this choice, again based on the comparative dimensions.

The next question regarded the finishing of the gate. It was not necessary for the finishing of the gates to be the same as that of the rampart, for one thing because the distances between the trusses differ. Fragments of a timber wall, including some burnt beams, have been found at one of the other gates in Haltern. This wall structure is comparable to that of a gate in the castellum van Alphen aan de Rijn.

This consists of a sill plate on which nearly continuous beams or thick planks and panelling rest. This construction can be made very solid – as long as it’s connected to the main supporting structure behind – so that it can also withstand attacks. Comparative research was also necessary for the inside of the gate, though there was no need to go far to find this: excavations of the other gates in Haltern were conclusive. Intermediate posts between the trusses here indicate exterior wooden panelling of the wall.

The position of the gate doors and the direction of rotation is also based on comparative research; in this case information from the Roman castellum of Carlisle served as an example. A rabbet in the sill plate made it clear that these were inward-opening gates.

Reconstruction, situation as at May 2015 (Kees Peterse). Further elaboration regarding dimensions and proportions and detailing. The nail pattern is also shown.

The following questions were raised for the actual construction. What did the trusses look like and what kind of joints were used? To this end, oak timber fragments found during excavations of Roman fortresses throughout Northern Europe from this period were subjected to a detailed analysis. Wooden beams with notches, pin hole connections, anchor beam connections and the like have been found. Numerous wrought iron nails have also been used, many of which have been found in excavations. The chosen joints are geared to the play of forces in the construction, the logic of building in prefabricated parts and the established order of construction. The collaboration with Zimmerermeister (master carpenter) Mr B. Terhalle of the Haveloh sawmill in Ahaus, Germany was essential in this respect.

Left: Haltern, wooden plank from a Roman well. The wood was hewn with an axe.
Right: Prefabricated trusses. The visible sides of the posts have been hewn with axes. Photo by Kees Peterse, 2015.

The next question regarded the tools and techniques used to work the wood. Only a few pieces of wood have been found during excavations in Haltern, including planks from a well with hewing marks. The next step was an investigation of the commonly used tools. Excavations throughout the Roman Empire have uncovered a wealth of axes and saws. It was even possible to draw conclusions about the coarseness of saws, as pit saws already had ‘set teeth’ (teeth angled away from the blade, like on a rip saw). Ultimately, it could be concluded that the large beams had been hewn, the smaller beams sawn. Many of the smaller beams will have been cut from a hewn beam, so always had one or two hewn sides and three or two sawn sides.

The entire structure is made of solid oak from the Münster region. A hewn finish was chosen for the large beams, a sawn finish for the smaller beams. It was a curious step in the construction process to hew the machine-sawn oak beams afterwards. To save costs, this was only done on the visible side. This hewing required a lot of testing and fine-tuning. An axe with a right-angled blade (adze) was chosen, although a ‘normal’ axe (broad axe) was probably originally used.

The first beams for the reconstruction were hewn ‘rustically’; as the work progressed the beams hewn were so smooth that the hewing marks are barely visible. The machine saw cut was not reworked on the small beams and planks, given that these parts were also sawn in Roman times. Naturally, the cut is more regular and squarer than this would have been originally.

Although, in this form, the Roman earth and timber rampart would have been stable and robust enough to withstand the attacks of the Germans for an extended period of time, it did not comply with contemporary regulations. The strength of the historical structure could not be ‘calculated’ using contemporary means, which is why it was decided to add a concrete foundation, auxiliary structures and steel tension bars. Fortunately, the earth infill of the rampart keeps all of these modern features from view.

The ramp for wheelchair access and the fall protection features are also new additions. These are modern in appearance, quite different to the rest.

The earth and timber rampart with gateway of the Haltern Roman fortress is an impressive structure, especially because of its prominent, elevated location. The grey weathered-wood appearance is not in keeping with this prominence. Isn’t it more likely that the rampart would have had a lime coating with perhaps mock joints to make the rampart look like it was made of brick instead of timber? That would have produced an even more impressive and intimidating image, intended to deter attackers. 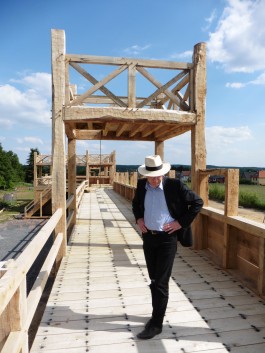 The earth and timber rampart on completion. Photo by Jan van der Hoeve, 2016.