Roman architecture manifested itself in various forms. In the 2nd and 1st century BC, significant innovations like the use of concrete and brick opened up many new possibilities in the design and construction of buildings. In the first centuries of the Common Era, the wave of building activity across all parts of the vast Roman Empire offered architects the opportunity to constantly develop, adapt and improve new forms of construction. However, despite all the changes and innovations over the centuries and despite all regional differences, certain principles continued to apply in Roman architecture.

In many buildings, the longitudinal axis played a decisive role in the design. This ‘axiality’ (organisation around a central axis) often went hand in hand with symmetry in the form of a mirrored arrangement of spaces and rooms with respect to the longitudinal axis, and ‘frontality’, i.e. an emphasis on the façade of the building.

These design principles made it possible to create a hierarchy in the building, for example by giving important spaces a place along the longitudinal axis. The need to accentuate certain areas and parts of the building, both on the exterior and in the interior, is another characteristic of Roman architecture. To set these spaces apart from the rest of the building, the architect could draw on specific building forms, such as colonnades, pediments and vaults, as well as various forms of decoration, such as architectural sculpture, mosaics and murals.

These features provide guidance in the reconstruction of buildings of which only the foundation remains and some building fragments have survived. This also applies to another characteristic feature of Roman architecture, namely the use of set geometric ratios and proportions, such as the specific height to diameter ratio of a column, or the ratio of length to width to height in certain rooms.

In his reconstruction research, Kees Peterse mainly focused on Roman buildings in the Netherlands and Germany, at the northern frontier of the Roman world. In part, these are buildings from the early days of the Roman presence in these regions, around the beginning of the Common Era. This was the time of the Augustan German Wars (between 12 BC and 16 AD), when Rome tried, in vain, to conquer new territories on the far side of the Rhine. Other buildings date back to later centuries, when Roman rule on this side of the Rhine provided a long period of peace and tranquillity.

Ten structures are presented here as reconstructions, six of which had a military function and the other four a civilian one. On this website they are divided, by nature and date, into four groups.

* Four wooden structures from the time of the Augustan German Wars, excavated in the Roman fortresses of Oberaden, Haltern and Nijmegen-Kops Plateau.

* Two monumental masonry structures dating back to the end of the 1st century, excavated in and directly outside the fort of the Tenth Legion (Legio X Gemina) on the Hunerberg ridge in Nijmegen.

* A masonry temple from around 100 AD, excavated in Elst-Westeraam. 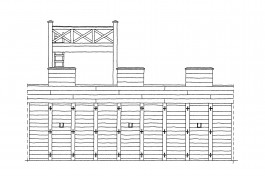 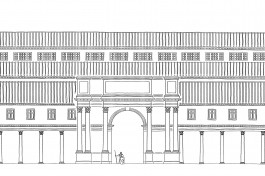 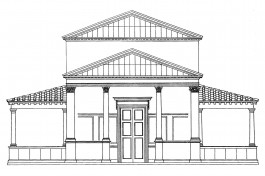