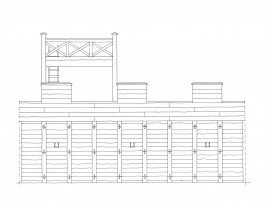 When, shortly after 20 BC, the Romans first permanently stationed troops in the Lower Rhine area, they built their fortresses entirely from wood. It was only in the course of the 1st century that they gradually switched over to masonry construction, though timber construction never completely disappeared.

In the run-up to and during the Augustan German Wars (between 12 BC and 16 AD), the army built fortresses at various strategic locations, not only on Roman territory west of the Rhine, but also in unfriendly Germanic territory. The Lippe, a tributary of the Rhine, provided an important attack route for the army here. Along the Lippe, in Oberaden and Haltern, large military camps were built to accommodate the Roman legions. At the Kops Plateau in Nijmegen, a smaller fort was built, likely a command post for the Roman military commanders.

There was an abundance of wood in the local forests, and loam from the area’s many stream and river valleys could be used as infill for the timber framing. The Romans brought with them basic designs for their constructions from the south, but tailored them to the conditions they faced in the north.

- I - The earth and timber rampart of the Oberaden legionary fortress

- IV - An officer’s residence at the Oberaden legionary fortress