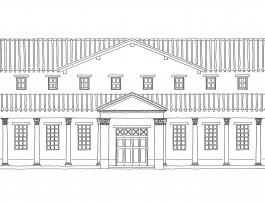 The Latin word villa had a much broader meaning in Roman times than it does today. The Romans used the term villa to refer to large, systematically organised farming estates. The villas along the northern border of the Roman Empire provided the many fortresses and the newly founded towns with food. These days, we use the term villa almost exclusively in reference to a large, luxurious house on its own land rather than to any farming operations on the estate. In Roman times, the villa was often situated in a beautiful location and was finely crafted in a luxurious Roman style.

The principal house of the various villas differed greatly in terms of size and architecture, though most consisted of a large central room, with a kind of veranda or colonnade (porticus) at the front, flanked by two side wings. All kinds of other living, working and storage rooms were situated around the central room. Many villas had a cellar and bath suites or even a small, detached bathhouse. Other typical Roman elements were the underfloor heating (hypocaust) in one or more rooms, the windows with panes of glass, and murals painted on the plastered walls.

- I - The villa at Mook-Plasmolen

- II - The villa at Kerkrade-Holzkuil

- III - The villa at Nuth-Steenland