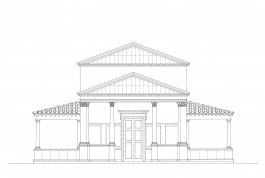 In the Roman provinces north of the Alps and Pyrenees, from the fusion of Roman building forms with indigenous Celtic traditions a new model of temple emerged, the ‘Romano-Celtic temple’. This style of temple distinguished itself from the classical Roman temple, of which the Maison Carrée in Nîmes is a beautifully preserved example.

Roman temples were built on a high, long rectangular podium and were generally only accessible from the narrow front side by a set of steps. Columns were usually only at the front, sometimes also along the side, though rarely at the back.

Classical Roman temples, of which relatively few were built in the northern provinces, were always dedicated to the Roman state gods.

Romano-Celtic (also called ‘Gallo-Roman’) temples were more or less square structures that projected above the monopitch roof of the colonnaded ambulatory that enclosed them. These temples were usually at ground level or only slightly raised from the ground. The colonnade could be completely open, with each of the columns on a separate plinth, or partially closed, with the columns on a low continuous wall. Many of these temples were dedicated to native gods.

Reconstruction of a Romano-Celtic temple at the sacred precinct at Altbachtal, close to Trier. Based on: J.B. Ward-Perkins, Roman Imperial Architecture, 1981, 229, fig. 139A

- I - The temple at Elst-Westeraam