The reconstruction Kees Peterse created of this building shows a complex of surprising size and grandeur. In addition to the enormous floor space, the proportions of the great hall or basilica at the rear are particularly impressive. These new depictions have fuelled the discussion about what the function of this enormous building may have been.

Immediately outside the eastern gate of the legionary fortress at Nijmegen was a large rectangular building complex, covering an area of 137 by 166 meters. Similar complexes have been found in the immediate vicinity of several other legionary fortresses elsewhere in the Roman world. There, too, this complex would be one of the buildings that make up the canabae legionis, the civilian settlement near the fortress. This settlement would mainly have been inhabited by traders and craftsmen and other people who provided services to the legionaries.

The complex consisted of a large, rectangular courtyard measuring about 107 by 128 metres, which was completely enclosed by four elongated wings. The north wing faced the road that extended from the main street (via principalis) that ran through the legionary fortress and continued eastward from the fortress gate. Because this civilian settlement mainly had an economic function, these building complexes have long been interpreted as market halls (forum). According to a new theory, they may have served as a training complex (campus) for the soldiers stationed at the fortress, where they could train in the courtyard in the open air or sheltered in the covered halls surrounding this.

Left: map of the legionary fortress (brown) and the civilian settlement (beige) with some of the roads (dotted line: reconstruction). 1 shows the location of the market hall or training complex and 2 that of the amphitheatre. Based on: W. Willems & H. van Enckevort, Ulpia Noviomagus, Roman Nijmegen, 2009, 25, fig. 7.
Right: floor plan of the market hall or training complex, as reconstructed by Kees Peterse. Drawing by  Gerard Jonker.

Preliminary design sketches of the reconstruction of the market hall/training complex. Drawings by Kees Peterse.

On commission by Museum Het Valkhof, in 2005 Kees Peterse made a reconstruction of the complex, which the museum has displayed as a series of still renderings (2D reconstructions) and a 3D animation. In 2009, he was commissioned by the Municipality of Nijmegen to reconstruct one of the two columns that may have stood in the courtyard. Subsequently, in 2011, a life size reconstruction of the column in modern materials was erected at its original location in the residential area currently occupying the site.

Based on the foundation remains, Kees Peterse was able to reconstruct a floor plan that is symmetrical along the longitudinal axis. Noteworthy are the elongated halls, each approximately 8 metres wide, on the long sides and the approximately 13.5-meter-wide hall with central apse at the back of the complex. No trace of partition walls have been found in these halls, so they were likely open over their full length. In front of the hall in the back wing, a more than 5-meter-wide strip with alternating larger and smaller spaces can be found on the side of the courtyard. The three smaller spaces have been interpreted to be passageways to the main hall. 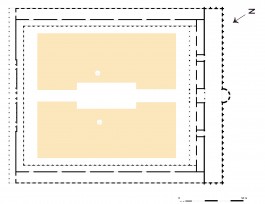 Reconstructed floor plan of the market hall or training complex (drawing by Gerard Jonker). The coloured areas indicate the wooden platforms that may have been installed in the courtyard.

In the reconstruction, the wing at the front has a central wall with three passageways to the courtyard and a colonnade along the front. On the foundation on the inside of the central wall, a wall has been reconstructed with engaged columns mounted on a continuous low plinth facing the courtyard and with large openings between the engaged columns that can be closed with shutters. This wall continues along the long sides of the courtyard and thus forms a connecting corridor on three sides of approximately 4.5 meters wide. In the reconstruction, this corridor on the side of the back wing has been given the shape of an open colonnade with columns on continuous low plinths, which emulates the colonnade at the front of the building.

On the floor plan, the great hall at the back forms the most spacious, grand part of the building. This is not only evident by the dimensions, but also in the apse added to this wing at the end of the longitudinal axis. In the reconstruction, the hall is also the highest part of the building, with a ridge height of nearly 20.5 meters. In the view from the courtyard, the central entrance to the great hall is architecturally emphasised with a portico formed by four Corinthian columns supporting a triangular pediment and tympanum. At a higher level, this pediment form is repeated at the front of a pitched roof structure at right angles to the ridge line of the roof above the hall. The entrances on both sides are also accentuated with smaller pediments set in the roof structure. 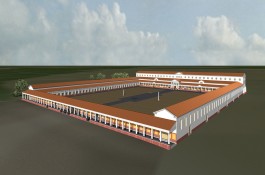 Reconstructed view of the market hall or training complex from the north. Still rendering by Gerard Jonker.

Reconstructed view of the front and entrance to the great hall from the opposite side of the courtyard. Still rendering by Gerard Jonker.

In the courtyard, traces of more than 50,000 posts have been found in the ground over a large part of the area. One explanation is that these would have served as carriers of a huge wooden platform that would provide a dry, clean surface on which market stands could be erected on market days. Kees Peterse accepted this explanation in his reconstruction. Another theory also assumes an economic function of the building and sees the remains of temporary cattle stalls in the post traces, which would have been set up in the courtyard during the recurring cattle markets. If the building served as a training complex, the posts could be explained as planted stakes for use in the individual weapons training of the legionaries.

Two more or less circular concentrations of brick rubble were found in the middle of the courtyard; these have been interpreted as being foundations to bear the weight of monuments in the form of a column and statue. Kees Peterse has also accepted this interpretation in his reconstruction.

Reconstructed exterior view of the market hall or training complex from the south east, with the great hall with apse to the left. Still rendering by Gerard Jonker.

Reconstructed views of the interior of the great hall of the market hall or training complex. Left: the apse as seen from the central entrance. Still rendering by Gerard Jonker.

Click here to return to reconstructions of masonry structures