Recent excavations enabled Kees Peterse to reconstruct the principal house of this villa to a relatively high degree of detail. This principal building of the villa was initially simple in design. In a second construction phase, however, it was given opulent reception rooms and a luxurious bath suite. The result is captured in a computer animation, complete with the surrounding grounds and landscaping. 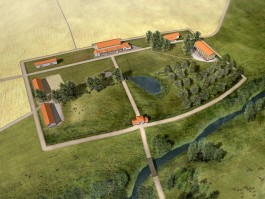 Reconstructed view of the villa from the south east around 200 AD, with the principal house at the top centre. Still rendering by Gerard Jonker.

The villa was situated on a slope that sloped downward to the south east and overlooked a brook valley. When excavations were carried out on the villa grounds in 2002, not only could the remains of the principal house be investigated archaeologically, but also the surrounding grounds with service buildings, granaries and stables.

The first inhabitants settled here between 75 and 100 AD. The initially modest buildings had grown into a large agricultural estate in the 2nd century. In the more or less rectangular grounds measuring approximately 150 by 250 meters, the principal house remained in the same location throughout, positioned centrally at the north-western edge. The villa was abandoned at the end of the 3rd century.

On commission by the municipality of Kerkrade, Kees Peterse made a reconstruction of the villa, which is presented in the form of a 3D animation and a series of still renderings (2D reconstructions). The 3D animation was brought out on DVD, which was included with the book Romeinen in Kerkrade: Villa Holzkuil (Kerkrade 2005).

The principal building, reconstructed by Peterse, was built in two phases, which is clearly recognisable in the floor plan. The oldest main structure, from the second quarter of the 2nd century, is a rectangular building measuring 17 by 31 meters, with four rooms (1-4) and a colonnade (5) at the front facing the brook valley. At the end of the 2nd or the beginning of the 3rd century, this core building was extended with a luxurious living room (6) at one end of the colonnade, a utility room (7) at the back, and a wing with a dining room and bath suites (8-16) on the northeast side. At the same time as this remodelling, the colonnade (5) was made more impressive with the addition of two portals.

Rooms 1 and 2 formed the living area, probably together with the adjoining room 3, which may have served as kitchen and daily living area. Above rooms 1 and 2 there was probably a floor with bedrooms. Room 4 functioned as a workshop. Room 1 was a raised room with a wooden floor and was accessible by climbing a few steps in a small front hall. From this hall, the residents could also descend a stone staircase into the storage cellar under Room 1.

The new grand living room (6) was close to the old residential spaces, but was not connected to these and was only accessible from the colonnade. This indicates that it mainly served as a reception area for guests, meant to make an impression. In the new wing on the other side of the building was a luxurious dining room (12) combined with bath suites (9-11).

In the reconstruction of the upstanding structures, the oldest part of the building (1-4) is recognisable as the highest part. Here, the timber framing used for the walls is also shown in a contrasting manner to the rest, though in reality this was probably completely whitewashed like the rest.

During the remodelling, two portals were added in the colonnade (5) at the front, in line with the passageways to rooms 3 and 4. In this case, the portals, crowned by a triangular tympanum, were simply an architectural accent in the façade and did not indicate the significance of the chambers behind these.

The newly added rooms on either side of the colonnade (6 and 12) have been given the same height and pediment in the façade as the portals and have not been reconstructed as two-storey corner towers, as in many reconstructions of other villas with the same series of rooms at the front.

Because the site slopes downwards in that direction, the new wing with dining room and bathing areas have been built on a lower level than the old building. By giving the four pediments in the façade the same ridge height, the new wing is harmoniously integrated, and one architectural whole has been created in the façade.

With the exception of the furnace (8) for the underfloor heating and the hot plunge bath, the rooms in the new wing were not accessible from the original building. In the reconstruction, space 15, designed as a small, semi-open colonnade, provides access to the service rooms 14 and 15, bath suites 9 to 11, and the small room 16, which may have housed a latrine. Finally, the bath suites were directly connected to the dining room (12).

The bath suites in the new wing consisted of a dressing and passage room (10), with an adjoining hot room (9) and cold room (11). The cold room (frigidarium) consisted entirely of an about 80cm-deep bath accessed by a few steps. The strikingly thick walls indicate that this room had a barrel vault and semi-dome. The hot room (caldarium) has also been given a barrel vault in the reconstruction, with grooves to quickly channel condensation downwards. The bath in this room was almost 70cm deep. 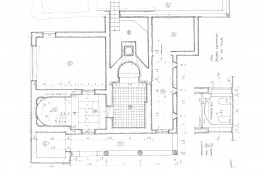 Reconstructed view of the new wing with dining room and bath suites, with measurements in Roman feet. Drawing by Kees Peterse.

In the sunken furnace space (8), behind the pool of the hot bath in the adjacent bath suite (9), there was a brick stoke hole in which a fire could be stoked. The boiler was placed above this stoke hole to provide the hot water for the bath. Hot air from the furnace also circulated through hollow spaces below the floor and was drawn through flues that passed through the walls and up to outlets in the roof, along the way heating the room with the hot bath (9) and the dining room (12).

According to Roman custom, a bath at the end of the working day could be followed by a dinner in the dining room (12). The special nature of this space is evident from the murals painted on the walls, fragments of which have been found in the adjacent bath suite (11). The lower half of the walls were painted to give the impression of mounted marble panels (faux marble dado), and the space above it showed scenes with human figures probably derived from Classical Greco-Roman mythology.

In Roman residential architecture, luxurious living and dining rooms such as this were usually located adjacent to an outdoor space like a garden and could be opened over the full width on the garden side. In Kerkrade-Holzkuil, the diners also had an unobstructed view over the grounds of the villa and the brook valley below.

Reconstructed view of the dining room from outside looking in (left) and vice versa (right). In the reconstruction, the figure paintings were inspired by ones found in Pompeii. Still renderings by Gerard Jonker.